7 November 2019 (Ulaanbaatar, Mongolia)
Asian Disaster Reduction Center (ADRC) had participated in the JICA Project for Strengthening the National Capacity of Earthquake Disaster Protection and Prevention in Mongolia from November 2016 to December 2019 (for 3 years) as a member of the Project team.
In Mongolia, especially in the western part, earthquakes with magnitudes of 8 on the Richter scale were recorded in the 20th century. In addition recently the earthquake risk has been increasing, because several faults were discovered near Ulaanbaatar city, the capital of Mongolia which is densely concentrated with the half population of the Mongolian people. The number of both felt and unfelt earthquakes has increased. In this circumstance, based on the request by the National Emergency Management Agency (NEMA) the Project was conducted aiming at the following three outputs: Output1- Enhancement of capacity for data collection on disaster risk reduction and coordination among related organizations; Output2- Enhancement of capacity of public administration officers related with the seismic assessment and seismic strengthening for buildings; and Output3- Improvement of disaster risk reduction education and awareness raising activities. 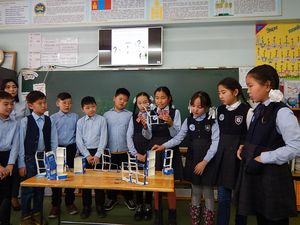 The ADRC contributed to the Output 3 activities, including of development of a guideline for DRR and educational materials in kindergartens and schools, implementation of training program for instructors and teachers, develpment of materials for DRR education and raising awareness, and implementation of training programs for residents. For more details, the final report of the project is available at:
https://libopac.jica.go.jp/images/report/12353173.pdf
(pdf, 5.36MB, JICA Library)
(2020/03/03 10:40)

3-6 July 2018
The Asian Disaster Reduction Center (ADRC) participated in AMCDRR held in Ulaanbaatar, Mongolia on 3-6 July. ADRC participated in several ways:
(1) Presentation on community resilience on a pre-conference event
(2) Individual meetings with ministers of each member country and other organizations:
- Ministry of Social Welfare in Myanmar
- National Emergency Management Agency in Mongolia
- National Disaster Management Centre in the Maldives
- Asian Disaster Preparedness Center
- Delegation from Turkey
(3) Announcement of the Official Statement
(4) Thematic event: Presentation on Best Practices for Sentinel Asia in Technology and Innovation
(5) Support for the Sentinel Asia exhibit
(6) Presentation on GLIDE on the Ignite Stage
Before opening main conference, Mr. Suzuki, executive director of ADRC, gave a presentation on community resilience at the pre-conference event, as shown in (1). ADRC also had several individual meetings with ministers as shown in (2). In those meetings, ADRC expressed appreciation for the countries' support for the visiting researcher program, discussed DRR projects accomplished in each member country, and discussed future cooperative projects. In the Official Statement (3), Mr. Suzuki spoke about promoting efforts to achieve unified disaster information.
ADRC is a member of Sentinel Asia, and gave a presentation on the response to flooding in Myanmar and developing standard operating procedures (SOP) for Sentinel Asia activity during the Thematic Event on "Technology and Innovation" (4). ADRC also supported an exhibit on Sentinel Asia (5). Finally, ADRC has proposed the use of a globally common Unique ID code for disasters, known as GLIDE, and this was presented on the Ignite Stage (6).
The closing ceremony was held on 6 July, at which the Ulaanbaatar Declaration, which included statements regarding the promotion of the use of science technology for DRR, was adopted.
It was also announced that the next AMCDRR will be held in Australia in 2020.
(2018/7/25 18:30)

The meeting was opened by welcome remarks by General Badral Tuvshin,Chief, National Emergency Management Agency, Government of Mongolia, followed by the opening remarks by Mr. Robert Glasser, Special Representative of Secretary-General for Disaster Risk Reduction, and the introduction of the agenda by Ms.Madhavi Ariyabandu, Officer-in-charge, UNISDR Regional Office for Asia Pacific. Session 1 chaired by Colonel Ganzorig Tsogtbaatar, Deputy Chief, NEMA, discussed the outcomes of AMCDRR 2016, followed by updates from the participating countries and international organisations.

Day 2 continued updates including that by ADRC regarding the four priorities of the Sendai Framework including Kumamoto study visit, tsunami workshops, GLIDE, the 10 years' anniversary of Sentinel Asia. Ms.Saya, Director, Cabinet Office who arrived on Day 2, provided an informative report on recent policy progress regarding tsunami DRR, lessons learnt from the Kumamoto earthquakes, gender issues, and OEIWG.
Preparation for the AMCDRR 2018 was then discussed based on a report made by the host country.In addition to the organizational issues including the dates and venue, Mongolia provided its initial proposal of priority issues of "Urban disaster resilience" and "Investment in DRR", which participants discussed by splitting themselves into three groups.
Day 3 first focused on the OEIWG and monitoring of Sendai Framework. UNISDR briefed about the Sendai framework and monitoring system, on which countries reported by referring to the status including collaboration with statistical organization.

In many countries, information relevant to natural disasters is likely to belong to line ministries or regional entities, and statistical bureau in charge of SDGs action plan may face difficulties to work for DRR, although majority of DRR organisations seem not yet to have established close relationships with the Statistical bureaunin individual countries.

Afternoon session of Day3 was first dedicated to the group exercise on the OEIWG outcome, which facilitated participants unfamiliar to the two years' discussion by OEIWG learning the outcome,although there seems to be significant gaps among participants in their understanding of the OEIWG outcome.

In the last session, participants shared the status of preparation and participation in GP to be held in Cancun in May with each other.
The three days' meeting was then closed by General Badral Tuvsin's remarks. Through many of natural disasters experiences, Japan has accumulated knowledge of dealing with disasters and developed its expertise together with advanced policies and technologies in the area of disaster risk reduction. This unique experience provides Japan with many valuable knowledge and expertise that it must now endeavor to share effectively with other members of the international community. From this point of view, this project is launched by the Cabinet Office of Japanese Government last year. Mongolia and Indonesia were selected as target countries of the FY2010 project.

<Mongolia>
Following the preliminary discussion for project implementation in Mongolia in December 2010 and the study tour in Japan for the official of the National Emergency Management Agency (NEMA): the implementing agency in January 2011, the workshops enhancing disaster risk reduction (DRR) capacities through transferring the measures and tools of Japan were conducted.

On 13-19 February 2011, the NEMA Mongolia in collaboration with the government of Japan and the ADRC conducted a series of workshops and trainings for strengthening the capacities for earthquake disaster education. They include trainings for the NEMA officials and school teachers, a workshop to learn Japanese DRR exercises utilized creative and innovative ideas, and lecture for school students, and DRR exercises in two target schools.

Through the above mentioned activities, the NEMA and the related organizations and schools learned various knowledge, techniques, and tools for enhancing and promoting earthquake disaster education in Mongolia. We believe this project became one of the major driving forces for further promotion of earthquake DRR in Mongolia.
(2011/02/20 10:40) On 5-10 December 2010, the ADRC reviewer team, composed of Prof. Masato Motosaka (Earthquake Disaster Research Laboratory, Disaster Control Research Center, Graduate School of Engineering, Tohoku University), Mr. Tshering Kezang (Governor, Dzongkhag Administration, Lhuentse, Bhutan), Mr. Vizesh Rana (Deputy Commandant, Ministry of Home Affairs, India) and two ADRC staff members visited Ulaanbaatar, Mongolia. During the four day survey, the team visited various ministries and institutions related to DRR activities, including NEMA: National Emergency Management Agency (ADRC's counterpart in Mongolia), to examine how they have been making the efforts for earthquake disaster education and capacity development by government and non-governmental organizations in Mongolia. Then, the team conducted on-site review of the building condition, and prepared a draft report of the survey result with all findings and recommendations. On the last day of the survey, a workshop was held for getting opinion and comments to finalize the report and attended by about 30 NEMA officials. The representative from Bhutan and India also made presentations on their efforts for earthquake disaster reduction in the workshop. It provided a very good opportunity for exchanging opinions each other.


Another reviewer team composed of Dr. Taiichi Hayashi of Research Center for Fluvial and Coastal Disasters of Disaster Prevention Research Institute of Kyoto University, Mr. San Kung from Myanmar's Relief and Resettlement Department, Ministry of Social Welfare, Relief and Resettlement, Ms. Crispina B. Abat of Philippines' Office of Civil Defense, and Ms. Yumi Shiomi of ADRC visited Bangladesh on 12-16 December 2010 to conduct a survey for learning about their ongoing efforts for Cyclone Preparedness in the country. The survey began with visiting relevant organizations in Dhaka such as Disaster Management and Relief Division of Ministry of Food and Disaster Management (ADRC's counterpart in Bangladesh), its Disaster Management Bureau, Bangladesh Meteorological Department, Bangladesh Water Development Board, Institute of Water Modeling and Bangladesh Red Crescent Society. Then the team moved to cyclone-prone Noakhali District in the coastal region to learn the situations through interviewing local DRM officials, volunteers and residents, and visiting cyclone shelters and embankments. The team members with cyclone expertise and experiences of severe storm countermeasures in their countries actively shared opinions during the survey.