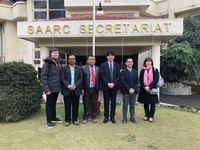 ADRC engaged in three different activities during the visit to Nepal. Firstly, ADRC Executive Director, along with researchers from JICA Tohoku Center and University of Hyogo, met with Mr. Sushil Gyewali, CEO of National Reconstruction Authority (NRA) and other officials. The meeting discussed the joint research project on Modeling Disaster Recovery Governance in Asia. Mr. Gyewali explained the process as well as the progress of recovery from the 2015 Gorkha Earthquake. He reported that as of December 2019, 85% of all projects were completed. During the field visits, the team learned that NRA utilizes 'User Committees' to reconstruct completely damaged heritage sites (e.g., Ranipokhari). NRA also promotes 'Integrated Settlements' in reconstructing private houses (e.g., Ward 12 in Melamchi). Since NRA will be dissolved in the end of 2020, its functions will be transferred to the National Disaster Risk Reduction and Management Authority (NDRRMA) - a newly established agency. Secondly, ADRC, in collaboration with experts from Asian Institute of Technology (AIT) and GeoThings, organized a workshop on the 'Utilization of ICT to Strengthen Disaster Resilience'. In this workshop, GeoThings demonstrated the functions of 'geoBingAn' - a social media Apps that functions to report personal safety and simple assessments (e.g., building damage) following a disaster. Thirdly, ADRC coordinated other separate meetings with SAARC Secretariat, NDRRMA, Planning Ministry, and JICA Nepal.
(2020/03/13 14:40)

18-19 December 2012 (India, Nepal)
ADRC, conducting the research on the Asian and Pacific nations' needs to satellite data for the disaster management, visited to Disaster Management Section, which is part of Ministry of Home Affairs in India and Nepal. In India, the Director and Officer of satellite agency attended the meeting. In Nepal, experts for disaster response and planning departments attended the meeting. ADRC gave a status update on the Sentinel Asia Project and shared ideas about specific ways that satellite images can be (or are being) used in disaster mitigation activities in each country.
(2013/1/8 13:40) ADRC conducted the second pull down test of a retrofitted building in Kathmandu, Nepal, on 2-3 November to compare with the first pull down test of a non-retrofitted building on 15 October as one of activities of Earthquake Risk Reduction and Recovery Preparedness Programme (ERRP).
The non-retrofitted building used for the first pull down test completely fell down by intensity 13.5 ton, whereas  the retrofitted building used for the second test did not even crack when intensity reached as much as 25 ton.
The comparison clearly demonstrates that earthquake-resistance of a building can be strengthened by applying the proposed retrofitting method (steel wire mesh plus mortal coating).
We will further examine the test results and produce a poster to promote the use of the proposed retrofitting method to masonry buildings as a very useful and cost-effective tool to enhance earthquake resistance.
(2009/11/09 19:10)

The Asian Disaster Reduction Center has been carefully planned and prepared "Pull Down Test" for the last one year as a big event of "Earthquake Risk Reduction and Recovery Preparedness Program for the South Asian Region".  The first "Pull Down Test" of the existing non-retrofitted  building was conducted on 15 October in Katmandu, Nepal.
This time, a 30-years old existing building was pulled until falling. The main purposes of the experiment are to enhance awareness of the threat of earthquake by observing actual situation how the building is collapsed when a big earthquake occurs, and also to examine the strength of an old house. Further, we will conduct the second "Pull Down Test" on 2 November for the purpose of verifying the effectiveness of the retrofitting by the JAKETTING method.
Many participants from Nepal government, United Nations, the ERRP member countries, and local communities observed the result of the experiment with particular interst. As the tensility was carefully enlarged, the cracks on the wall of the house became bigger, and finally the house was collapsed in a moment. The participants could realize well the vulnerability of the existing buildings to the big earthquakes. Further, local newspapers covered the event giving a great deal of space, which contributed to raiging people's awareness of disasters.

Meetings with focal point persons in Katmandu who are responsible for "Pull down Test of an existing house in Katmandu, Nepal" that has been planned as a part of Regional Technical Assistance of ERRP, and 4-day Training of Vulnerability Assessment of Buildings/Retrofitting and Recovery Preparedness for Municipal Engineers in Nepal" as a part of the country activity of ERRP Nepal were conducted in 15-25 July 2009. More details, please see the following mission report.
Mission Report
(2009/7/14 11:30)

The annual meeting of the Asian Disaster Reduction and Response Network (ADRRN) 2008 was held in Kathmandu, Nepal on 3-5 November 2008. In the meeting, titled Learning through and from the Network, approximately 40 participants from NGOs and international organizations as well as the ADRC had active discussions in order to further reinforce the activities of their organizations and ADRRN toward DRR.